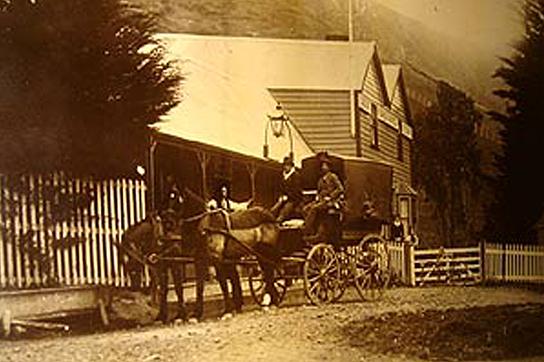 The Governors Bay head of the Harbour area was settled from 1845.

The Governors Bay microclimate enabled very productive farming and horticultural industries. And from these industries grew other supporting services, such as land transport, the blacksmith, and boating.

Steamers and small boats would transport fresh produce from locations such as Governors Bay, Teddington and the Wheatsheaf (in the days when the harbour was deeper) to supply direct with immigrant and other ships coming into Lyttelton.

Most of the area’s first period public buildings survive and can be visited.

The coach service that began in the early 1880s operated a service from Charteris Bay, Teddington and Allandale to the railhead at Lyttelton.

Trips were made twice a day and the coach carried up to 10 passengers plus mail.

The coach depot was located at the police station in Allandale.

Horses were changed at each end of the journey.