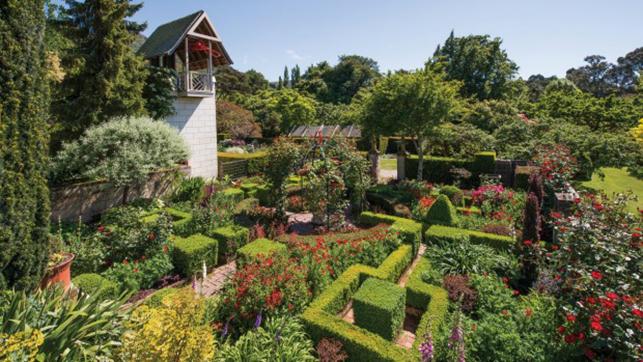 Read this and more on http://www.gardenstovisit.co.nz/private-gardens/ohinetahi.aspx

Ohinetahi is in a small bay with fine views down the length of Lyttelton Harbor and up to the surrounding hills.

A garden was first made on this site in 1865 by T.H.Potts, New Zealand's first botanist. Potts planted a great variety of exotic trees and shrubs, many of which still stand on the perimeter of the garden. He died in 1888 and thereafter the garden fell into dis-repair until it consisted of little more than a lawn around the house.

Sir Miles Warren and Mr and Mrs Trengrove restored the house and began the present garden in 1977. Designed by two architects and an artist, the garden inevitably has a strong frame. The formal garden consists of a number of separate garden rooms of differing style and character arranged about two axis, one running east west and another north south.

On the side of the house there is a formal lawn with curved macrocarpa hedges at the end balanced by a pool and poolhouse at the opposite end. There is a rose garden enclosed in box hedges, traditional double herbaceous borders leading to a gazebo, a square walled garden planted in colours of red and green, and a walk of pleached hornbeams on stilts leading up to an oval lawn encircled with a hornbeam hedge.

Beyond the poolhouse a potager garden is arranged about a large marble capital and a glasshouse. From the oval and the gazebo, steps lead down to a woodland garden shaded by Pott's original trees with a stream flowing down to the harbour. It is densely planted with rhododendrons, camellias and a good variety of New Zealand native plants. A swing bridge extends the cross axis to a bush walk.

The garden is accented by architectural fragments and modern sculpture.